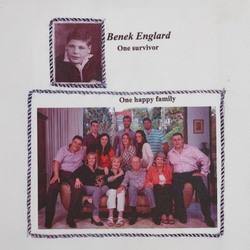 I was born on 7th of August 1928 in Krakow, Poland. After the Germans invaded Poland, we continued to live in Krakow and later I was sent by my mother to a friend in Czestochowa. There, in mid 1943, we were confined to Hasag Pelcery a working camp where I worked until the Russians approached in Jan 1945. I was then taken to Buchenwald and as the Americans approached in April 1945, I was taken to Theresienstadt. The Russian army liberated Theresienstadt on 9th May 1945. Three months after liberation I was brought to England. We were a group of 300, and stayed in Windermere for 3 months. Then 30 of us were transferred to Ascot for about one year. From Ascot I travelled to London to attend the ORT School. At the end of a year in Ascot we were dispersed, myself with Hesiek Mlynarski (Zvi Dagan) and Herman Rosenblat went to live with a family in London. I continued my studies at the Ort School. After four years in England, Hesiek Mlynarski and I emigrated to Israel where I had family: a grandmother and an uncle. My immediate family: mother, father and my younger sister, all perished. The square shows me six months after liberation and also my present family: myself with my wife Yaffa (also a survivor), two daughters Anat and Nina, their husbands Shlomo and Gil and five grand children: Inbal with her husband Kfir and Ofir, Barak, Noy and May. This is to show that ‘Am Israel’ is still alive and kicking.