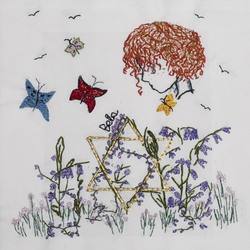 I was born in Berlin on August 1942 and was deported to Theresienstadt in June 1943 where I remained until liberation on 3rd May 1945. My mother died there of TB in 1944. My father had already been deported to Auschwitz. I arrived in England as one of the girls on 15th August 1945 with ‘The Boys’. After spending time at Bulldogs Bank and Weir Courtney I was adopted by a London based Jewish couple. I married a Jewish man and began a new life.

The square represents myself as a young girl alone arriving in a strange country. The bluebells remind me of the first spring in England where there were carpets of bluebells. It was such an amazing sight and the smell was overwhelming. The rainbow signifies a new start in life.