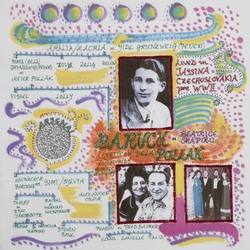 Baruch Pollak (Vojtech bela) was born in Miskolc, Hungary. His father was a tailor, his mother was a midwife. His mother was from Jasina and as a toddler my father, his two older brothers and his parents moved back there. Jasina is located in the Carpathian Mountains set in a valley surrounded by beautiful mountains.

On the day after Passover 1944, the Jews of Jasina were rounded up in the center of town and taken to a ghetto called Mateszalca in the Satmar region of Hungary. They remained there in deplorable conditions with thousands of other Jews for a period of four weeks. At that time they were loaded onto boxcars and taken to Birkenau, Poland – Auschwitz! From there my father was transferred to other concentration camps: Mauthausen, Melk and finally ended up in Ebensee where he was liberated by the Americans. At that time he was reunited with two uncles and a cousin, the only survivors in his family. They lived together in the Sudetenland until my father was able to join a children’s transport hoping to end up in Israel. He arrived in London and was housed in a shelter in the East End of London. He was part of a large group of survivors called “The Boys” of the ‘45 Aid Society. Thus began his new life. He met and married my mother in 1948. He worked very hard and lived for his family. My father had a big heart and was a warm, loving and very generous man. May his memory be a blessing for us all.We chose to highlight his family tree on the quilt square in honour and in memory of those lives lost in the Holocaust but also to recognize the potential loss of future generations that would have been born to our family.