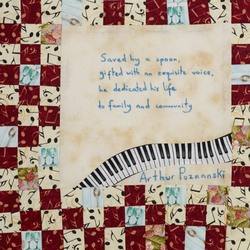 Our father Arthur Poznanski was born on November 7 1927 in Praszka, Poland. He worked in the Hortensia glass factory, in Bugaj as a joiner, and went through the camps at Buchenwald, Schlieben, and Flossenbürg. He escaped by jumping from a train that was transporting him to Mauthausen in 1945. On landing he was shot by a guard and left for dead but the bullet hit the spoon he was carrying in his pocket. He managed to crawl to a Czech village where he was hospitalised. He found his brother, Jerzy, in Theresienstadt and was brought to England in August 1945 where he started a new life first as a professional singer and then worked in the textiles industry. He married Renee Rudolf in 1960. He passed away August 10 2009 and is survived by two children and four grandchildren.

Arthur had an exquisite voice, and found joy and comfort in music throughout his life whether singing, composing, playing the piano, or conducting the local synagogue choir. That is why we filled the square with so much music. The interspersed images of glasses represent both the glass factory and his celebration of life in freedom, and of course we had to include images of a spoon.