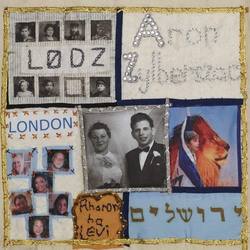 Aron was born on 10th August 1927, the youngest child to Faiga and Gavriel, who was a shochet and had a butcher’s shop which operated out of their two room apartment in the town of Lodz, Poland.
The black and white photo shows Aron’s parents, sisters Rivka, Chana and Zlota and brothers Issa and Velvel, all of whom were murdered by the Nazis.
Aron arrived in the UK in August 1945 with “The Boys” and worked in the diamond business and was renowned for his honesty and integrity. The wedding photo celebrates his marriage to Evelyn whom he met at the Primrose Club in London. They were married on 14th June 1953. The family photo shows Aron’s two children, Fiona born in 1958 and Gary in 1961, four grandchildren (not pictured) and five great-grandchildren. The youngest, Oliver Aron, is named after him.Aron was a committed Zionist and only TB stopped him going to Palestine to help set up the state of Israel. He was laid to rest in Jerusalem in September 2013, the day before his granddaughter Alice made aliyah. Aron’s Hebrew name and the photo of Jerusalem symbolize his love of Israel.
Aron was a tough man – really tough. Without his physical and mental strength he probably would not have lived many years past his stroke in 1995.