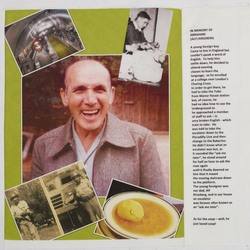 Alf (Abraham) was born in Magnuszew, Poland, on the 7th May 1928 (according to official documents). The picture in the top right hand corner shows dad preparing food in the kitchens on the Calgarth estate near lake Windermere, where the children were brought after the War for rehabilitation (we spotted this image – part of a larger photo – in a BBC documentary a couple of years ago about The Boys, and my husband was able to freeze the on-screen picture and take a photo for us). Dad always loved cooking (and was very good at it) and told me that he used to help his mother when he was a small child in Poland.

The two pictures of him in uniform were taken in Israel in 1948 when he volunteered for the army. He was extremely proud of the fact he had done this which is why we chose to include these images on the square. The text on the square reads:

‘A young foreign boy came to live in England but couldn’t speak a word of English. To help him settle down, he decided to attend evening classes to learn the language, so he enrolled at a college near London’s Charing Cross. In order to get there, he had to take the Tube from Manor House station but, of course, he had no idea how to use the Underground so he approached a member of staff to ask – in very broken English – which train to take. He was told to take the escalator down to the Piccadilly Line and then change to the Bakerloo. He didn’t know what an escalator was but, as it sounded like “ask me later”, he stood around for half an hour to ask the man again until it finally dawned on him that it meant the moving staircase down to the platform. The young foreigner was our dad, Alf Kirszberg, and in our house an escalator was forever after known as an “ask me later”.

As for the soup – well, he just loved soup!’