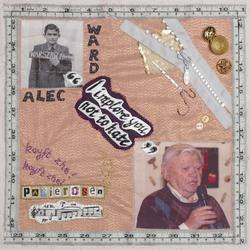 Alec was born (Abram Warszaw) in Parysow near Lublin, Poland, and lived mainly in the village of Magnuszew. He survived two ghettos, three slave labour camps and two concentration camps and was liberated from Mauthausen by the Americans on 5th May 1945. Alec’s entire family perished during the war but the shooting of his younger brother Laib (aged just 9), who he protected for three months in the forest following their escape from the ghetto, had a particularly profound impact on him.
Alec came to England in October 1945 and became a tailor and then a quality controller for Windsmoor. He fell in love with Hettie Cohen in 1952 and married in 1953. They had two children, Lyla and Mark, who died in 1981 aged 23 of melanoma. Alec adores his grandson Liron, named after Laib and welcomed his son in law Barend and his children into the family.

Music is a thread running through Alec’s life. As a child he enjoyed singing at home and in the synagogue and remembers being embarrassed when his mother called in the neighbours to hear him singing when collecting potatoes from their cellar. He has fond memories of klezmer music at weddings and classical music at skating rinks. He also remembers a soldier who came to a Friday night service singing “Lecha Dodi” beautifully and perpetuates the memory by singing this melody when he is called up to the Torah. In the ghetto he smuggled in cigarettes to sell, attracting customers by singing songs like “Papierosen.” “If you buy my cigarettes you will rescue me from certain death.”

In the camps he formed a friendship with a boy with a wonderful voice and they would sing together to soothe themselves. Alec made this friend a hat from scraps of blanket and twisted yarn that he collected from the handles of boxes he carried for work. In Buchenwald, when lining up for roll call dressed in a thin striped uniform, he would hear the inmates’ orchestra. Alec has always been perplexed by the psychology behind the cruel disconnect of music with inhumane conditions. But following retirement, listening to music and gardening has given Alec pleasure and comfort.

Alec has given talks to synagogues, schools, and many other settings, to speak about his experiences and to create witnesses to his testimony. He always tried to include some songs including “Papierosen” and would end with the words “I implore you not to hate as it was hatred that caused the Holocaust in the first place. Had I lived with hatred in my heart for the last 60 odd years I would not be here today.” This has inspired generations of all ethnicities and faiths.