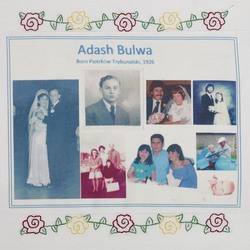 My father, Adash Bulwa, was born on 15th September 1926 in Poland in Piotrków-Trybunalski. In 1941 he was taken to Belżec Lubelski, which

He was brought to England, arriving in Southampton in October 1945. He started a new life in Manchester where he became a tailor, met and married Zena Goldstone and had two daughters, Suzanne and Frances.I have chosen these photos as they depict happy events in Adash’s life. The photo (centre top) is of Adash a few years after arriving in England. To the left is a photo of him and his wife Zena at their wedding. To the right (centre top) are photos of his daughters’ weddings. Below these (centre) is a snapshot of the Bulwa family on holiday in the 1960s and to the right of this is a photo of his three grandchildren, Adam, Danielle and Zoë, taken in 2000. The last two photos are more recent (September and November 2014) and are of Adash with his great-grandson, Louis, and the most recent addition, his great-granddaughter, Chloe.