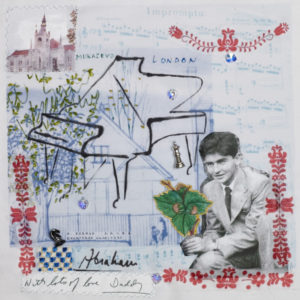 Abraham Herman was born on 16th February 1931 in Mukačevo in Transcarpathian Ruthenia, at the time, part of Czechoslovakia. He was the youngest child of Chaim and Rosza (Rachel – née Braun).In 1938, the region was occupied by Hungary. In April 1944, after the German army invaded Hungary, the Jews of Mukačevo were forced into ghettos, and in May 1944, when Abe was just 13, they were deported to Auschwitz. In the winter of 1944/45, as the allies advanced, Abe was forced to go on two “death marches” – the first from Auschwitz to Buchenwald. From there, he was taken to work in Rehmsdorf, where he found his brother, David. They joined forces on the second death march to Theresienstadt, eating grass on the way, and then getting stomach cramps and each, in turn, wanting to give up and sit down, which would have resulted in their being shot by an SS guard. But David and Abe did not allow each other to give up. They were liberated in Theresienstadt in May 1945.

After liberation, Abe spent six months in a castle in Stijine, near Prague, where children who had survived the holocaust, were being rehabilitated. He then joined his eldest brother, Zruli, at a DP camp in Munich where they were preparing to go to Palestine. In Munich, Abe accessed two lots of food rations, and would exchange food items for private piano and violin lessons. After a year in Munich, instead of going to Palestine, my father joined his brother, David, who had gone to England. Soon afterwards, he discovered that his sister, Miriam, had survived; she went to live in the newly-founded state of Israel.

In England, Abe qualified as an architect, and designed our first house, of which his preliminary drawing appears in the square. The hazelnut twig created by Abe’s eldest granddaughter, Hava, commemorates his fondness of eating his favourite nuts! Abe married Israeli Hava, and together they had four children. Although he didn’t know it while he was alive, Abe now has eleven grandchildren. He died in 1989, at the age of 58.