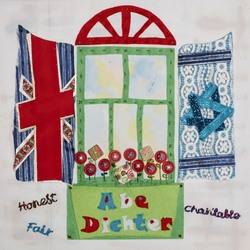 My father Abraham Dichter, known as Abe, was born on March 27th 1930 in the small Polish village of Hrubieszów, close to Lublin. He was the sole survivor of his whole family. He spoke very little of his camp experiences,

he once referred to the camps where he had been imprisoned as “all the five star” camps: Budzin, Majdanek, Auschwitz, Mauthausen and Theresienstadt. Liberation came on May 8th 1945. My father never removed the number that was tattooed on his arm in Auschwitz: A-18446. It served as a testimony of human barbarity in a world that began to question the authenticity of such horror. At the age of 15, my father came to Britain to begin his life. He received an education, a profession in engineering, forged life-long friendships and began to collect some good memories. He never asked “why was I chosen to suffer?” only, “why was I chosen to survive?” Abe is buried in Tel Regev near Haifa, Israel, close to where his wife, children and grandchildren live. His gravestone includes a memorial plaque for his parents, Sheindal and Moshe Bear and brothers Dovid and Baruch whose fates were unknown.The flags, made from ribbons and lace, represent the United Kingdom and the State of Israel, both of which were his home. The ribbons, lace and threads are leftover materials from the wholesale haberdashery shop H. Suskin Textiles Ltd. in London’s East End which he jointly owned together with two other Boys, Harry Suskin and Lipa Tepper, in a partnership that lasted 40 years. The red button flowers represent my father’s favourite flowers, red geraniums and stand for his nine Israeli grandchildren, all born in his lifetime. The square buttons represent his children, Mark and Ruth and the central patterned flower is Floris, wife, friend and support for 46 years of marriage. The words are the lasting legacies that Abe has left his family: honest, fair and charitable.