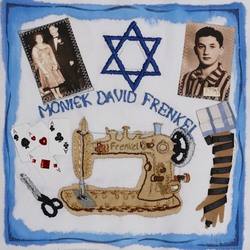 My father, Moniek Frenkel, was born on 24th November 1926 in Lodz in Poland. In 1941 he was taken to Auschwitz and then to Dachau until he was finally liberated in 1945. He was brought to England in 1948 and started a new life becoming a master tailor.

My mother, Esther Frenkel nee Peljord, was born on 9th February 1930 in Krakow in Poland. In 1940 she was taken to the ghetto in Warsaw and went to various slave labour camps until she was finally liberated in 1945. She was brought to England in 1949 and started a new life becoming a seamstress and later assisting my father in his business.

The square is a reminder of when my father was refreshed as a young man after the war, when he once again donned his concentration camp attire with number displayed, giving hope from his achievement of surviving. The second picture shows a happy outing for my parents at a function, as normal as any couple should be, despite the horrors they both endured separately.