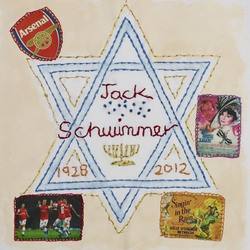 Our father Jack Zisha Schwimmer was born on 5 April 1928 in Stróżowska, a small village about 2 kilometres from the town of Gorlice, Poland. During the 2nd World War he spent three years being interned in six different camps, including Buchenwald. He ended up in Theresienstadt where he was finally liberated. He was then brought to England and started a new life. He worked as a tailor, salesperson and a manager and eventually became a husband and father.
The square represents something of his life and we have chosen these subjects because of his love of Judaism, old musicals and his later interest in Arsenal. He also looked after his family and home immaculately.