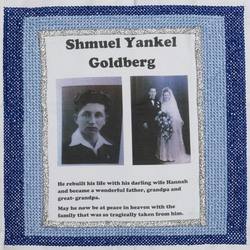 When Julia rang me and told me about the memorial quilt it was quite late in the evening and that night I couldn’t sleep. Not being in any way artistic I didn’t know what I was going to produce but I just knew that my dad was going to have a square! Luckily my sister Maralyn was coming over to stay with me the following weekend so after much discussion beforehand, when she arrived in Liverpool we got to work .First we decided on the photographs we were going to use and chose these two because the first one, taken not long after dad arrived in England shows that although he’d gained his health and strength, there was still great sadness in his eyes. The contrast of the other photograph being his wedding day and a new beginning of a new family.

Maralyn is much better than I with computers etc., so after taking a picture of the photographs we then emailed them to my computer and then Maralyn was able to transpose the pictures on to a page together with the wording we wanted. We then printed that off and drove into town. We bought a small white T-Shirt and found a shop that was able to iron the pictures and wording onto the T-Shirt. Next stop was the Haberdashery. We chose silks for sewing the border. Needles, cotton, white backing to sew it on to and for me to do the border on with holes in it so that I could do the cross stitch – scissors, ruler, pencil and rubber! We were all set.

Maralyn went back to London and the rest was up to me. I set it all out on the dining room table and looked at it and walked away from it. I did this for several days. I was afraid to start it because I was convinced I’d mess it up. After about five days I picked up the pencil and ruler, measured it out and after that there was no stopping me! Every stitch was placed with love and pleasure because I was doing it for my dad! I enjoyed every minute of it. I’m not saying it’s a work of art, but it’s mine and Maralyn’s masterpiece for our dad, Shmuel Yankel Goldberg known as Sam Gardner from Pietrokow, Poland (born 9th December 1925).

I want to thank Julia and all the team of Second Generation 45 Aid Society for giving us this opportunity to honour our father and the other survivors in this way. This was indeed an honour and a pleasure.