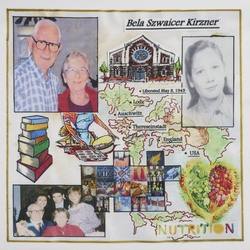 I was born March 15, 1929 in Lodz, Poland. I was interned in 4 concentration camps. The first one was ghetto Lodz for 4 and one half years. In August 1944 the ghetto was liquidated and my family and I were taken to Auschwitz where I lost my whole family. After 10 horrible weeks, I was selected to go to Germany to work in an ammunition factory. In March 1945, they put us in open coal railroad cars and shipped us to Theresienstadt, Czechoslovakia. We were liberated by the Russian Army on May 8, 1945.

In August 1945, 300 of us boys and girls were sponsored by the Jewish Committee to go to England. We arrived in Windermere and I lived in Manchester until July 1947. Then I left for the U.S. and lived in Boston with my relatives. I went to High School and Hebrew College. I met my future husband Rubin, and we were married on November 5, 1950. We have 2 daughters, a son and 2 grandsons.

I have chosen the square because it represents the past of myself as a teenager, and the present and future of my family. It symbolizes my interest in books, baking and keeping up my Jewish Heritage.