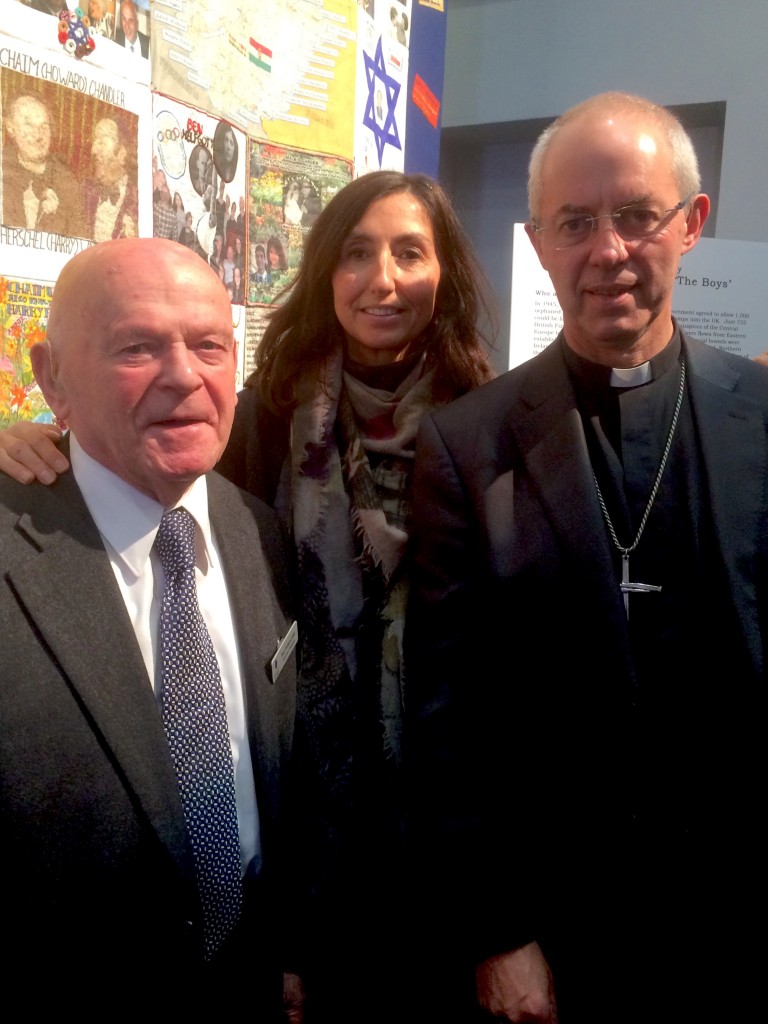 The Archbishop of Canterbury, the Most Revd. Justin Welby, met members of The Boys and visited the Memory Quilts at the Holocaust Memorial Day event in Westminster, Central London on 26 January 2017. Archbishop Welby is pictured here with ‘45 Aid Soc. President, Ben Helfgott, Julia Burton and the Memory Quilts for The Boys.

The Archbishop addressed the 900+ visitors at the Holocaust Memorial Day event. A transcript of his speech is shown below

Archbishop Justin Welby warned against a culture of ‘collusion with evil’ in his address to the annual Holocaust Memorial Day service in Westminster on Thursday January 26, 2017.

The text of the Archbishop’s address is below

Life goes on but the end of the killing does not mark the end of the suffering. Liberation for the survivors is a two-edged sword. It brings an end to appalling dehumanisation and suffering but starts the rest of a life, often marked by memories of what has happened, memories that circle the psyche, looking for moments to recapture the personality, and which torture and humiliate again and again. The restoration of individuals and communities is our responsibility as a society that rightly holds to biblical Judeo-Christian injunctions to welcome the stranger in our midst and to seek the flourishing of all within our land.

I have just returned from a visit to Auschwitz/Birkenau, with 60 clergy; its witness is to appalling human suffering caused by the terrible collusion of the silent majority. Whilst Jews and others were caricatured and vilified by unscrupulous politicians and venal newspapers, there was an unquestioning acceptance by ordinary people. Life goes amid a culture of alternative facts, of post truth, of collusion with deeds which sing the tunes of evil, a culture which needs to be challenged at every level and in every conversation and debate in this country, if it is indeed to be a place of safety and healing for those fleeing tyranny and cruelty, if indeed life is to go on, flourishing and fully.

The Community Sponsorship Programme encourages grassroots organisations and communities to welcome Syrian refugees into homes and then to commit to support and encourage them as they are welcomed as full members of British society, irrespective of their faith or ethnicity. Life for them, after yet another place of indescribable suffering, is life that goes on when there is welcome and healing.

Participation in the scheme in partnership with Lambeth Council and the Home Office has called us at Lambeth Palace to act on what we say. The road to restoration begins with us. Yes, advocacy for the voiceless, justice for the disenfranchised; but here also, mercy for the refugee. Holocaust Memorial Day and the witness of the survivors cries out to those of these times for nothing less, so that life goes on.

Earlier this month the Archbishop visited Auschwitz/Birkenau. You can read his reflections about the experience on his web site.