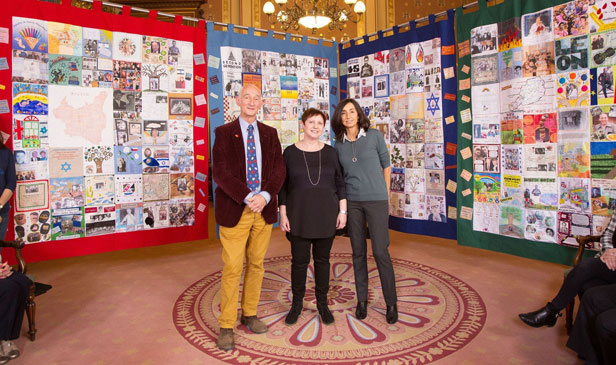 The story of The Boys and the Memory Quilt for The Boys featured in a special edition BBC TV programme on 15 Jan. The Antiques Roadshow focused on holocaust memorabilia in advance of UK Holocaust Memorial Day (HMD), held on 27 January.

The BBC team researched and explained the story of The Boys and the Memory Quilt. They showed original video footage of a group of The Boys arriving in the UK in 1945. Members of The Boys were present together with 2nd Generation members at the filming which took place in December 2016 in the Foreign and Commonwealth Office in London.

David Herman’s daughter, Julia Burton, explained the background to the Memory Quilt and how it was created and together with Sue Bermange, told some of the stories behind the quilt. Sue Bermange explained the how her father, Bob Obuchowski’s quilt square tells his story from his childhood in Poland, ghetto and concentration camps and the family and new life he created in the UK. David Herman’s quilt square was presented by Julia who outlined how the it celebrates many aspects of his life, his family and character.

Survivors, their children & grandchildren presented precious family artefacts and keepsakes, and told moving stories of what they represent in the one-hour special which was a powerful and moving programme. Some survivors presented the yellow star. Other items presented to the show’s team of experts (for discussion, not for valuation) included a tiny teddy bear, the only toy that a child refugee ever had, Shabbat candlesticks, buried for safekeeping in the garden of a family home and a Hanukia restored to its original condition and now used by the next generation at their annual Hanuka celebration.

The presenters were visibly moved hearing some of the testimonies and handling some of items presented, in particular, a prisoner’s uniform, resembling pair of striped pyjamas, worn at Auschwitz, a child’s tiny white t-shirt bearing the yellow star, recovered from Auschwitz after his death and the item described as “the most chilling”, a 1938 German board game “Juden Raus” (“Jews Out”) where players took the role of policemen clearing Jews from a city.

One of the show’s highlights was the Memory Quilt which was on display in the Foreign and Commonwealth Office in London for the duration of the filming. The Memory Quilt is considered to be an important way of celebrating life after the Holocaust and the achievements of the Survivors.