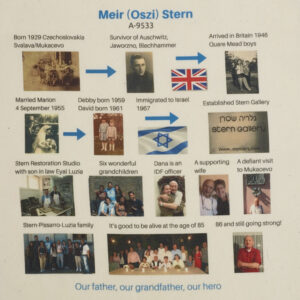 Meir (Oszi) Stern was born in Svalava, Czechoslovakia on 30.4.1929. The family moved to Mukacevo in 1939 and from they were taken to Auschwitz in May 1944. Meir also went through Yaworzno and finally Blechhammer, where he arrived after surviving the death march and also from where he escaped in January 1945. He was liberated by Russian soldiers who found him hiding in a basement.

Meir then made his way back to Mukacevo via liberated territory, arriving home in February 1945. He wanted to go to Palestine but only made it to Bucharest. There he had a chance encounter with a woman who recognized him and informed him that his mother and sisters were alive in Prague. He immediately turned back, headed to Prague and was reunited with his family in March 1945.

For over a year Meir was in convalescence, being treated for tuberculosis. Finally, together with his sister Elsa, he caught the last transfer of children to England and in June 1946 was taken to Ashford Sanatorium in Kent and then to Quare Mead where he stayed till the end of 1947. He then moved to London, to the Primrose Jewish Youth club in Belsize Park, and worked as a dental mechanic. Meir married Marion Feuerstein in September 1955. A keen interest in the arts led him to attend the Borough Polytechnic School, thanks to the support of the Jewish Board of Guardians. In 1965 he established Stern Art Dealers in Notting Hill. Meir finally fulfilled his dream to live in Israel in 1967, when he and his family made Aliyah and settled in Tel-Aviv, where he established his second gallery. His children, Debby and David, together with their spouses, now manage the galleries he established in London and Tel-Aviv.

Meir Stern has six grandchildren. He leads a happy life with his beloved wife Marion in Tel-Aviv, enjoys the sea, concerts, opera, theatre and art exhibitions. At the age of 86 he is healthy and optimistic and proud to live in his own country.