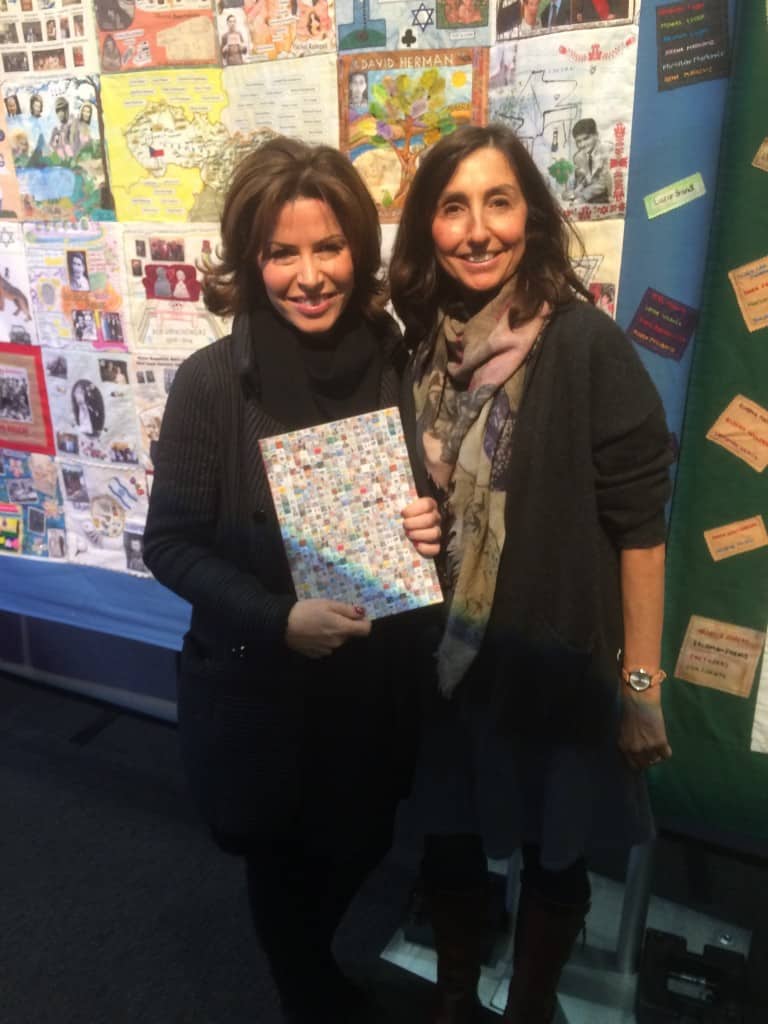 In the Autumn of 2013, the Second Generation committee met to discuss what we could do to commemorate the 70th Anniversary of the Liberation of “The Boys,” our parents. We could insert the word ‘special,’ but for this particular group of people, every anniversary is special.

A few years previously, Julia had been working as an art volunteer at Otto Schieff house in London before it closed down. There had been a meeting of art volunteers to talk about the kinds of things they could do with some of the elderly people. That was the first time Julia met Sheree Charalampous, who showed a beautiful quilt she had made with dementia sufferers and their families. Julia was impressed by this stunning work of art and it stayed with her. When we were wondering how to honour our parents for the 70th Anniversary, she remembered the quilt and described it to us. The Second Generation group agreed that we would create something similar, a work of art to celebrate our parents’ lives.

At the 69th Reunion of The Boys in 2014, we gave a presentation on our plans for creating a Memory Quilt. We distributed packs containing a square of white cotton fabric, instructions, and images from Sheree’s quilt to give people ideas of what could be achieved. Our Quilt project had been launched and over the ensuing months, lots of time, energy, persistence and sleepless nights were to unfold!

Julia contacted Sheree for advice on how to make the Quilt, but when Sheree heard about it, she insisted on coming on board to help. We held our first quilt workshop in June 2014, which was fairly well attended by survivors and their families who were keen to get on with producing their squares. Another quilt workshop followed in October and by then, word had got out and we were overwhelmed by the number of people who turned up wanting help.

We realised that people needed more help than we had anticipated and that the only way forward was to have a regular slot every week where people could meet up with our fantastic team of creative volunteers to discuss their ideas and get help turning those ideas into the unique creations we see today. Every Tuesday afternoon for the next few months, Julia ran workshops at the Holocaust Survivors’ Centre where increasing numbers of families came for help to get their quilt squares underway. She placed an ad on the Jewish Volunteers’ website, asking people with sewing and embroidery skills to contact her. Sure enough, over the next few weeks, a number of volunteers got in touch to offer their skills. The talent being offered to this project was amazing: graphic designers, expert embroiderers, artists, they all came to see how they could get involved. And so if survivors and their families were struggling to realise their ideas, Julia and her team stepped in to help, printing photos on fabric, painting onto material, embroidering names and pictures, all to bring the Memory Quilt to life.

Meanwhile, we continued trying to reach as many of The Boys and their families around the world as we could, mainly in Israel, America, Canada and the UK. We also established a network of contacts in Israel through the efforts of Nina Hecht. Slowly word got round and as people came on Tuesday afternoons and saw the growing portfolio full of ideas and inspiration, more and more people came forward to make squares.
Contacting people was not easy. Our Second Generation database was useful but out of date as over the years people had not updated us with their new contact details. The ‘45 Aid Society records also needed updating and Kim Stern worked hard to support this initiative. Every week we tried to contact more and more people. Jasmine Bandel made many calls and researched survivors’ backgrounds, as did other members of the Second Generation group in an attempt to reach as many of The Boys and their families as possible.
Initially, only a small number of quilt squares were offered to us and we were concerned that out of the 732 members of The Boys, we might only get a few, perhaps 40 or 50 if we were lucky. But slowly the numbers crept up and when we hit one hundred squares we were thrilled, knowing that this was a big achievement.

The deadline in December 2014 came and went. Squares continued coming in, more and more people became interested in getting involved and so we extended the deadline to the end of February 2015. We could not afford to go much beyond that date because of the time needed to assemble the Quilt, or as we now realised, Quilts.

Representing all 732 of The Boys on the Quilts presented a few challenges. For some of The Boys, the only information we had was their place of birth and for these we created maps of their countries of origin on which to write their names. Almost half of The Boys were Polish and we wondered how best to include so many names on a map of Poland. Sheree made contact with a calligrapher who agreed to create a map out of the names of the Polish Boys in calligraphy. Julia met two other volunteers who agreed to make the remaining maps. The map of Austria was embroidered together with the names of the Austrian Boys and a lot of research went into finding maps with accurate pre-war borders for Germany, Romania, Hungary and Czechoslovakia. Confirming which Boys had come from former Czechoslovakia was no easy task as the borders had changed many times over the years and, with the confusion between Hungarian and Czech nationalities, it was difficult to ascertain who came from where. Initially there were lots of Hungarian Boys and few Czechs listed, but as we did more and more research, the number of Czech names increased and the number of Hungarians diminished! And finally, there were some Boys for whom we had no information at all, not even their place of birth. Their names were embroidered and stitched into the borders of the Quilts. In this way, everyone was represented.
To accompany the Quilts, we decided to make a book so that anyone interested could find out the stories behind the squares and what the symbolism represented, and so we asked contributors to write a ‘blurb’, describing the what, how and why of their square.

Today we have four Quilts containing 156 squares and 5 maps covering a further 12 squares - quite an achievement and a stunning tribute to The Boys. Unveiled at the 70th Annual Reunion of the Liberation on 3rd May 2015, we are now planning to display the Quilts in museums, art galleries and synagogues in the UK, Eastern Europe, Israel and North America.