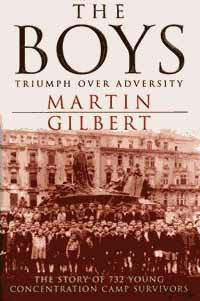 When Britain declared itself willing in the summer of 1945 to take in one thousand young survivors of the Holocaust, no more than 732 could be found.

During the following eight months they were flown from Prague and Munich to Windermere and Southampton, as well as to Scotland and Northern Ireland. ‘The Boys’, as they call themselves – there were girls among them too – became a tightly-knit group of friends whose shared wartime experiences were terrible beyond imagining, but whose companionship gave them a lifetime once they were in England. This is their story.
.

Their early childhood was spent in the towns and villages of Poland, Czechoslovakia and Hungary, in normal children’s worlds of family, friends, school and holidays. Here is a portrait of pre-war European Jewry, both urban and rural, now lost.

From the age of ten, and even younger, to the age of fifteen and sixteen, ‘The Boys’ were forced into the torments of ghettos, concentration camps, slave labour camps and death marches; they experienced the Holocaust from a child’s perspective, often witnessing at first-hand the death of their parents, brothers and sisters. Their liberation was followed by the difficult rebuilding of their lives in Britain, lives which had been physically and emotionally drained by their nightmare past. Yet they drew on the strength of their group to move forward, both individually and together. After leaving their hostels, they remained a closely-knit, affectionate, devoted band of brothers – and sisters. Their families having been destroyed, they created a family among themselves.

Martin Gilbert has brought together the recollections of this remarkable group of survivors. With magisterial narration, he tells their astonishing stories. The Boys bears witness to the human spirit, enduring the depths, and bearing hopefully the burden and challenge of survival.

Martin Gilbert is one of the foremost historians of our time. He was born in London in 1936 and educated at Highgate school. He studied modern history at Magdalen College and did his graduate work at St Antony’s College, Oxford. In 1968 he succeeded Randolph Churchill as the official Churchill biographer, writing six volumes of narrative and editing (to date) ten volumes of Churchill documents. He has also published a definitive history of the Holocaust, comprehensive studies of the First and Second World Wars, and twelve historical atlases, including those on British, American and Russian history.

He is married with three children and lives in London. His wife Susie has been his principal private helper for more than two decades. Martin Gilbert, a Fellow of Merton College, Oxford, since 1962, was made a CBE for services to education in 1990, and in 1995 was knighted for services to British history and international affairs.