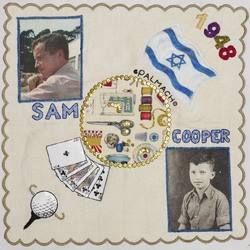 Sam Cooper, originally Szmul Kuczer (Kutscher), was born on 9th August 1931 in Hrubieszov, near Lublin in Poland, to a well-to-do family. His father was a grain merchant and property owner. He was the youngest and only survivor of his family.

At the beginning of November 1939 he, his parents, younger brother and sister were taken to the newly-erected ghetto in Hrubieszov. In October 1942, there was an attempted escape action and only he and his mother survived, the others were shot. His two older brothers died in the Warsaw ghetto.

As the war was ending he was in a group taken outside the camp to be shot but, with courageous daring, saved his life and that of many others by telling the SS he was not Jewish. They escaped and were rescued by the Americans.

Finally, after wandering Germany he was sent to Indersdorf, from where he was sent to England with the group now called the ‘Boys’. He was first at Southampton then Woodberry Down hostels. Aged only 16 ½ he went to fight in the Israeli War of Independence and joined the Palmach. He stayed for two years and returned to England. Before he was out of his 20’s he had married Valerie, had two children, Hania and Joel, and started his own menswear manufacturing business, which eventually became very successful.

He was immensely outgoing, loved playing golf and playing cards with his friends. He had a generous heart, gave much to charity and was the first to put his hand in his pocket socially. His lust for life and sense of fun lit up the lives of all who knew him.