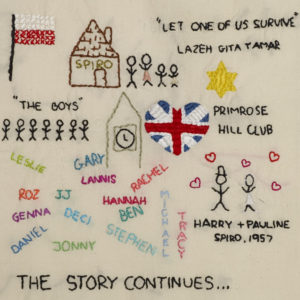 Harry Spiro was born in Piotrkow Trybunalski Poland on 21st November 1929. Before the war he lived with his parents and younger sister Gita.

Harry worked in a glass factory in the ghetto and, due to his mother’s premonition, he evaded being sent with his family to Treblinka gas chambers as she pushed him out of the house against his will saying: “Let one of us survive!”

In August 1945 Harry had the opportunity to come to England with The Boys. He was looked after in Windermere and then started a new life in London where he worked in menswear creating a successful career. In 1957 he married a lovely red head called Pauline and together they had three children.

The square was designed by his nine grandchildren – Justin, Genna, Declan, Stephen, Jonny, Daniel, Rachel, Ben and Hannah – to show what truly means the most to Harry and the lessons he has learnt and passed on to them – the importance of family. From his tragic loss he has created a loving, close Jewish family unit that would make his mother proud.