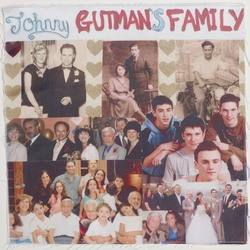 Our darling father, Wolf (Johnny) Gutman was born in Lodz, Poland, on 23rd October 1927. He suffered in various concentration camps before being brought to England in 1945, where he started a new life.

In The East End of London he met his love Sylvia whom he married. They had 3 lovely daughters named Rosalind, Yvonne and Annette, whilst building his factory business making ladies coats and jackets.

Despite losing his father, mother, sister and brother in terrible ways, suffering horrific experiences, he still managed to survive and make a wonderful life.
This Quilt square represents his family, from the top, starting with a photo of himself, his parents and his wife. Then his daughters with their husbands, grandchildren with spouses and great grandchildren…. so far. Some of the many happy occasions shared together.